There is No Such Question...

Crooked minds.... tomorrow it could be you.

Scam (hate saying bad words) artists from RI and MA created a new term to rename and sell Nadia Russ' artistic invention 'NeoPopRealism' - beautiful and unique artistic technique and style.
In 2004, they also recklessly created a trademark "red square" for the paper they sell (they are playful, thought of the Moscow's “Red Square”, Nadia Russ came to the US from Moscow.). They thought Nadia Russ never find out about their crooked activities. There is a motto in their website: "Artists for Respect" which suggests innocent visitors such as teachers, grannies, children, an idea that they are striving for respect and working to improve our society.
This site says no word about the real Inventor of the art style and art technique they promote and sell to people who are not familiar with visual arts in depth - about Nadia Russ.
To art professional, this website  is just a craftsmen’s corner, where craftsmen-copycats make ridiculous statement they are inventors of art form. Sure, suggesting this idea makes craftsmen - copycats  feel good, especially when some less educated people believe them.

Those grannies and children, and some art teachers who are not familiar with recent fast-moving and innovative artistic life, who learned from swindlers the basics of new artistic technique created by Nadia Russ, should know the dark story behind that.

First presentation of zentangle took its place in RI.
But this story began earlier, in 2002, when Nadia Russ' eleven innovative ink drawings [in which she used line and repetitive patterns that filled spaces] appeared in RI. Also then, David T  Shwaery (President of Pawtucket Arts Council, RI) and Clifford Cone said to Nadia Russ that her NeoPopRealism “paintings were demolished accidentally by contractors“. It was the lies, they just wanted to steal her paintings, she left them on consignment, but did not know how. Multi-millionaire, D.T. Shwaery could easily afford Nadia Russ' artworks, but it was not in his plans... Greed?

Months later, under people’s pressure who called them, Shwaery and Cone returned her artworks.
The following years, Nadia Russ, her humanistic projects and idea of NeoPopRealism were constantly attacked online for, seemed, no reason. Not only attacked, all her ideas and projects were copied, step-by-step, by copycats since 2003 till present.

Nadia Russ created this style in 1989, copycats didn't know that.
In  January of 2003, she created a word NeoPopRealism and announced her invention worldwide..
In 2004, copycats created a new term to rename NeoPopRealism. And poor substitute of NeoPopRealism art style under another name (and with low artistic qualities) was presented to the public in RI by Rick Roberts and Maria Thomas, who said they are "inventors".

Copycats are not artists (this is a comedic part), they could not execute any decent ink drawings, so they were drawing very simple backgrounds/designs which Nadia Russ used as the backdrop in her ink drawings.

The parade began.
David Thomas Shwaery was bombing Nadia Russ with anonymous, spyware-infected emails, asking for brainstorms: copycats could not move forward without Nadia Russ' innovative thinking… But to prosper, the dulls had to ruin the top art origin - NeoPopRealism and all Nadia Russ’ activities related to it; they wanted to replace it with their childish, craftsmen's substitute.

During those years, several times David Thomas Shwaery told Nadia Russ: “You will go nowhere.”
Living like in a war zone, Nadia Russ didn’t know anything about this their project until June 2011. But June 4 of 2011 was a mystery-solving. She found out about the craftsmen-copycats and why David Thomas Shwaery was bombing her with spyware, was telling her: “You will go nowhere“, and much more through some small booklet. She immediatelly recognized her art style. It is still unique in art world and can be easily identified, especially by its creator.

Crooked minds are dangerous. They steal and lie looking into you eyes with innocent face expression... Stop them, boycott them today because they are constantly in search for the new 'victims'. And tomorrow it could be you.
Posted by Zentangle False at 3:10 PM No comments:

Email ThisBlogThis!Share to TwitterShare to FacebookShare to Pinterest
Labels: Crooked minds.... tomorrow it could be you.

V. Witman (gallerist in 1989-1991 of art gallery Aktsia in Moscow, which exhibited Nadia's artwork and other prominent artists such as Anatoly Zverev),
Cologne, Germany
07.23.2011
Posted by Zentangle False at 8:20 AM No comments:

Email ThisBlogThis!Share to TwitterShare to FacebookShare to Pinterest
Labels: "Nadia Russ is the person..." V. Witman

Zentangle? This is amazing, low life. What others say on IP subject:
--If you plagiarize others' techniques, you steel their emotions and tell your spectators a lie with your work. Works as such equal zero. Wu Guan-Zhong
--It's a shallow victory to bask in another's battle. Dorenda Crager Watson
--Stealing ideas from contemporaries is rude and tasteless. Stealing from the long dead is considered literary and admirable. The same is true of grave-robbing. Loot your local cemetery and find yourself mired in social awkwardness. But unearth the tomb of an ancient king and you can feel free to pop off his toe rings. You'll probably end up on a book tour, or bagging an honorary degree or two.  N.D. Wilson
--Gathering your own reference materials, sketches and using your own imagination is going to help you grow as an artist far more than stealing someone else's work. Bonnie Hamlin
--Plagiarize, plagiarize, / Let no man's work evade your eyes, / Remember why the good Lord made your eyes, / Don't shade your eyes, / But plagiarize, plagiarize, plagiarize. / Only be sure to call it research. Tom Lehrer.  (Call it research, DO NOT CALL IT INVENTION!)
--You can steal a man's bolts, but you can't steal his thunder. Ed Zerne


Posted by Zentangle False at 6:25 PM No comments:

Email ThisBlogThis!Share to TwitterShare to FacebookShare to Pinterest
Labels: "Zentangle? This is amazing..." Leo B.

"I admit that zentangle is ..." Jeff Ibbo

I admit that zentangle is very common, like tattoos or just decorative.

Nadia Russ has more in her drawings like telling stories and making compositions so every bird sings with its own beak, some sings false. When someone plagiate you it's a sign that you have done something good, so be happy!

Email ThisBlogThis!Share to TwitterShare to FacebookShare to Pinterest
Labels: "I admit that zentangle is ..." Jeff Ibbo

"I wish we could put more images ..." Johnson-Roehr, Catherine Ann

Email ThisBlogThis!Share to TwitterShare to FacebookShare to Pinterest
Labels: "I wish we could put more images ..." Johnson-Roehr, Catherine Ann

I feel Nadia Russ's Art (NeoPopRealism) is "Contemporary Fine Art" and Zentangle is just a "Graphic Design". Her work of arts are influencing to other artist is great thing, but taking idea from her and re-branding it without her permission is not at all a good practice legally or morally.
"Imagination is more important than knowledge." Albert Einstein.   R. Gopakumar 07.12.2011
Artist
India/Bahrain http://www.gopakumarartgallery.com
07.12.2011

Posted by Zentangle False at 3:45 AM No comments:

Read in Google Books free preview about how infamous "zentangle" was born - pp 49-51: 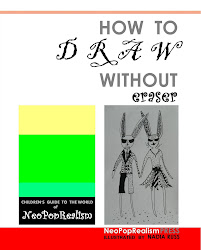 A book "How to Draw Without Eraser: Children's Guide to the World of NeoPopRealism" by NeoPopRealism PRESS teaches step-by-step how to draw images with ink pen. This drawing is fun and rewarding. Hostess girl Neo will guide your child through the book's pages. Learning to draw NeoPopRealism ink images will help develop intuition and artistic senses. To start, your child need only ink pen, as he/she will draw on this book's pages, following the offered patterns. It is like a game, just follow easy instructions and enjoy excitement! 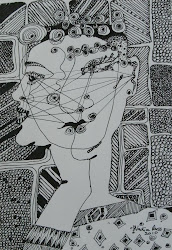 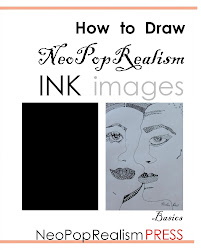 Learn how to draw the NeoPopRealism ink images with this new book, ISBN: 9780615515755. NeoPopRealism ink drawing concept was created by Nadia Russ in 1989. It was an experiment. She was trying to connect to the Universe and let the Universe use her as a Conductor when she created her drawings. She didn’t want to follow any other artists’ achievements, she decided to create absolutely new art form, like Picasso (Cubism), Dali (Surrealism), Andy Warhol (Pop Art) and a few other worldwide known artists had done. Nadia Russ took her ink pen and began to draw a flowing line that turned into shapes, figures, often faces. Then, some sections (or all), that appeared, she filled with the repetitive patterns. She never uses eraser because if a mistake made, it disappears with the following repetitive patterns that balance the whole composition. Her work was unique, no one did anything like this before. Later, January 4, 2003, Nadia Russ created a word NeoPopRealism and internationally announced new style of visual arts.